Warning: this page may not be for everyone. It contains graphic content and descriptive text.

Don was transferred to the Cath Lab and ICU on level 6 of Royal North Shore Hospital on the afternoon of Thursday 18th.

Sue, James and Ant were there to meet the detectives and Cedric, Don’s passenger who rang in the big guns. Don was taken off for tests, which we found out later included the insertion of three stents into one artery – the cause of the heart attack.

All manner of IV drips were plumbed in to give Don the best chance of recovery. A range of medicine for the heart, some pain relief, and maintenance saline solution. He was connected to a ventilator that topped up his breathing.

On his left side, all manner of electrodes were attached to monitor heart rate, CO2 levels, blood pressure, oxygen saturation and more.

Ant decides to catch the train to St Leonards and manages to miss his train. In a weird stroke of luck, Richard Mountstephens who was introduced to Ant by Don in 1982 got on the same carriage of the same train. The same day when going to street level to meet Uncle Bob, Ant and Nicki literally bump into Sarah Campbell, a long time orienteering friend of Ant. Was it not for Don’s love of orienteering in the 80’s and later, both Richard and Sarah would have been two strangers passing by. Instead, they’ve been lifelong friends for Ant.

Amazingly, Eryn was returning from a cruise ship journey where she was the stage show costume designer. There were only a couple of hours before she had to return home to Perth, and she managed to fit in a visit to see Grandpa before getting on a plane.

Liam and his mother Jenny Blue also made it to the hospital to visit Don on the Friday night.

Oldest son Jonathan arrived from Melbourne, meeting Eryn at the airport on the way through.

The Pymble household wakes up early. Jonathan is dropped off at the hospital by Ant and Cam, who head off to Shore for an early basketball game. They join Jonathan at the hospital after the game.

Matt Burnett, the oldest grandson, works on an oil rig on the Bass Strait. He was able to get special leave to return to Sydney. A helicopter trip, a rental car, a commercial jet flight, a bit of public transport and Matt was able to get Grandpa’s side.

Over the next few days, several IV drips were dialed down or removed. On day 4 were finally able to do an EEG test to determine the level of brain activity. Unfortunately, the scans indicated the brain had suffered catastrophically – there was no evidence that it was able to self-function.

Around 5am Don had a huge vomit when he was being moved. The mess was only just getting cleaned up before Don had an EEG test in the ICU. The EEG was to measure the brain activity.

A call is made by the doctor in charge for the family to come in at midday on Tuesday for a family conference.

Most of the immediate family is able to get to Royal North Shore Hospital for the family conference. With Jonathan on speaker phone, the doctor (and her team of nurses, social worker and ICU specialist) gives her prognosis. The EEG test provides strong evidence that there is no brain activity. It’s the machines that are keeping him alive, and that we need to make a decision.

The Burnett mob are to reconvene on Wednesday at midday to say our final farewell.

Jonathan returns to Sydney and heads straight to the hospital, bags in tow. Liam is already there. After they visit Don on Tuesday evening, Jonathan and Liam head out to Pymble to catch up with some of the family (and do some quick Photoshopping).

The doctor thanks all the family from far and wide. She asks whether we wish to see Don with or without all the ICU equipment plugged in. It is unanimously agreed to see him without the ventilator tubes and electrodes. She explains that it may take days not hours for Don to pass. Would anybody like to be with the ICU team whilst the tube is removed, knowing it will be a very uncomfortable experience? Virginia, as an experienced medico, elects to be present for us.

The tubes are removed, and his face cleaned up. Before the family can enter the room, Don passes peacefully away in only a minute or two. It’s 13:15 on Wednesday 24 October 2018.

The family comes in to say a final farewell. There are tears, hugs, smiles, and lots of silence. Everybody is so privileged to say farewell under these circumstances.

The bright side: he did not die in pain, he did not die slowly. He did not die by the side of the road or worse down at Balls Head. He died surrounded by family from as far away as Perth, Bass Strait, the Blue Mountains, Melbourne and all over Sydney. 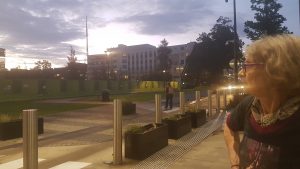 Thursday evening at the hospital 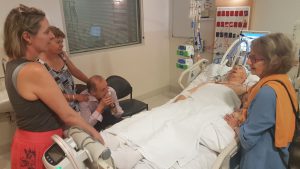 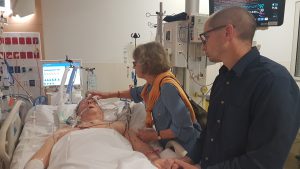 The Final Moment
Scroll Up