The Wake for Don Burnett was held at the Ku-ring-gai Bush Fire Brigade in North Wahroonga following the Don’s Farewell Celebration.

Scroll down for photos! With catering provided by brigade member Susie Jones, guests enjoyed a range of sandwiches, dessert treats, and a beer or two. The fire pit was lit in the traditional manner – a drip torch of course!

Don was famous for his love of Taylor’s Cabernet Sauvignon. A glass of the red drop was placed on the side of the firepit as people reflected on his life and shared stories.

Brigade Members recalled the novelty award given to Don – “the DH Award” – when he reversed the tanker into the shed without completely raising the roller door. The door was an inch too low, and during the reversing of the truck proceeded to peel off the sprinkler system on the cabin of the truck.

As the sun set, the final flag ceremony saw the Australian flag lowered from the half-mast, and carefully folded away. A glass of cab sav by the fire Mike and Sue have many memories across KBFB and Probus and more. Sue is not cross at all at Bob 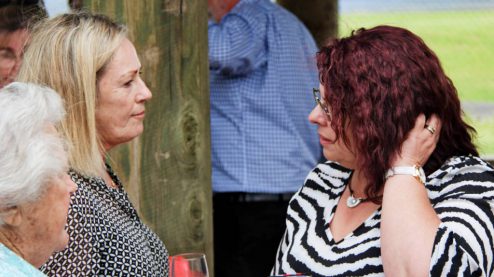 The latest generation of Isuzu tanker. Flag at half mast Around the fire pit All the beautiful and strong Burnett women. Four of the pavers at the newly opened brigade in North Wahroonga.
Scroll Up